For Thanksgiving this year, we had my family out to the house.  When I heard my grandma was coming, I asked her to bring the quilt so I could photograph it.  So here is this quilt's finished photo shoot (a month late):


Glad to finally be able to share some photos of it!
Posted by Renee at 2:56 PM No comments:

Last updated here.  I got a lot done on this quilt before Thanksgiving, and finished the back yesterday.


Finished sewing the back together Friday night, I think.  I had planned to use some scraps of batting for this quilt, but I didn't have any pieces big enough (and refuse to have more than two seams in my batting).  I decided to buy a whole bolt of batting (90"x40 yards!), so I'm waiting for it to be delivered before I can do the quilting on this quilt.  I can't wait for that part!  The sky, mountains, and hills will all have different quilting, and texture.  It's really going to transform it and make it more alive, I guess.
Posted by Renee at 2:49 PM No comments:

I've been pretty lucky lately and have had quite a bit of time to work on this quilt (first blogged here).  I spent about an hour cutting strips of fabric for the mountains:

After sewing together 3 mountains, I laid them out to see where to add more layers:


I didn't really think about how much longer each additional strip would need to be (about 2 inches, I think), so the mountains don't go down quite as far as I wanted.  But I like them a lot so far.  I sewed each mountain to the sky piece using a satin stitch (without using any stabilizer, though I've since learned about an adhesive that comes out when you wash it).  I ran out of the dark brown thread I was using and had to wait until this morning to make a trip to town to get more (so frustrating!).

I did some internet research and decided to attach the hills using raw edge applique (again, without any stabilizer or adhesive--just lots of pins).  This simple tutorial sold me on it.  I hope that the hills end up with that great fuzzy texture.  I think it will look really neat, plus what baby doesn't love good texture?

And that's where I'm at now!  Hoping to finish the quilt top tomorrow and get started on the (fun pieced) back on Monday.
Posted by Renee at 5:46 PM No comments:

I'm not really sure what to call this quilt.  It's a landscape quilt based on this one, and is being made for my friend Jennifer's baby, due in February!  While making it, I've been alternating between thinking of it as an art quilt and as a baby quilt.  Art quilts have so much freedom, they are the way they are, there aren't any rules on how to make it, or how it should look.  And baby quilts are made to be loved and used, so they need to be sturdy and fun.

After spending last night thinking of this quilt every time I tossed and turned (many times now with a 23 week pregnant belly), I thought of this quilt, and started making sketches when I got up:


During nap time I got a chance to go through all my fabrics and pull out colors:


I have a very, very small collection of oranges (only one, actually, the other two shown are smalls scraps!), though thankfully the ones I do have are perfect for this quilt!  My selection of light blues is pretty small too, but I decided to just make it work anyway:

So far my biggest issue has been getting past the mental image/expectation of it looking exactly like the one I'm basing it on.  I just don't have the same, or similar, fabrics (or the time or energy to get them) that that one is made from.  But I think the quilt I'm making will feel more usable, and I know it will be more fun for a baby!  :-)
Posted by Renee at 7:33 PM 3 comments:

I last updated on this quilt here.  I put the last stitches in last night, and washed, dried and photographed it today.  I'm hoping to deliver it on Friday!  So happy to have this quilt done, and so pleased with the way it turn out!  It is a Birthday present for my twin brother, Liam (our birthday is in August, but I told him not expect it until Christmas, so I'm a month ahead of schedule, ha!).


I really like how the back turned out too!
Here are a few detail shots:


Putting this quilt together was really great, and it came together really nicely.  I'm glad I took the time to be as precise as possible with the cutting, piecing, ironing, etc!  This quilt was really gratifying because it was so smooth to put together.  Glad it's going to a good home!

Back in March, I decided to participate in the Just One Star challenge by Moda.  They were hoping to get 1800 stars from quilters, then they would turn them into 100 awesome quilts to be given to injured service men and women.  I made two stars, one to honor each of the veteran Marines in my family: 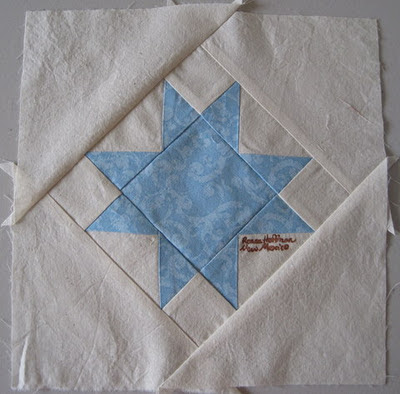 I hadn't thought about them much since I sent them in.  Then today I came across this blog post saying how the Just One Star challenge had received 12,000(!!!) stars!  Enough to make 1,000 quilts!  How amazing is that? I just love hearing little stories of generosity.
Posted by Renee at 6:05 PM No comments:

In my last post, I mentioned my trouble with finding a good layout for this quilt.  I hate bending over, kneeling, and crawling around a lot to rearrange them a lot (I do it though).  When I told my husband this, he said we should design a program that can easily rearrange photos of the blocks, which was the same idea I had come up with too!  So maybe some day that will be a reality.  But until then, my husband played with the blocks and came up with a good layout.  I spent the weekend thinking about it, and came home sure it was the right layout.  Yay!

And finally yesterday my kiddo actually napped and I got to start sewing on the sashing.  It's a lot darker than I originally intended, but I still like it.


I'm hoping to finish the quilt top by the end of the week, and start the quilting next week!
Posted by Renee at 1:45 PM No comments:

Oh dear, I did not mean for an entire month to pass before posting again!  :-/  Oh well, here I am with some updates.

October was notably busy for me, so I didn't get quite as much sewing/quilting done as I would have liked.  I did finish my grandmother's stacked coin quilt, but forgot to take completed photos!  Oh well, maybe next time I see her I can get some full quilt photos.  (Update: full quilt photos here)

I put the Bear Paw quilt on hold for most of the month.  I had a mental block on how to layout the blocks, then finally decided to just make a 4th brown block, but didn't actually get around to making it until yesterday!  So anyway, here's the current layout of the quilt, though I'm not sold on it at all:


I also worked on some other sewing projects:

I followed this tutorial for making an (easy!) double sided cover.  Then I saw the straps she reused from her old cover and knew I wanted them on my new one too, so I just kinda winged it with some stuff I had on hand.  Love the straps!

I also made a third project, but it's a Christmas present for someone that reads this blog, so I'll share it another time :-)

I've moved my sewing setup around quite a few times, and finally took a photo of the most recent one:


So far I like it...but that might not last long, I tend to move everything around in this room every month or so depending on my sewing needs, the lighting, and current temperatures.
Posted by Renee at 12:53 PM 1 comment: