It took me a while to finally getting around to putting the border on the quilt.  I don't know why I always procrastinate on putting borders on.  Oh well, I did it and it turned out fine.

Then I got to thinking on the back of the quilt, which I had not thought about at all.  A month or so ago I stocked up on some Kona solids I use a lot (brown, purple and grey), so I decided to use the brown and then add some easy pieced blocks to it.

I thought I had 3 yards of it, which I though was perfect.  So I got started on picking some fabrics for the blocks.  Here are the blocks all sewn together, ready to be ironed: 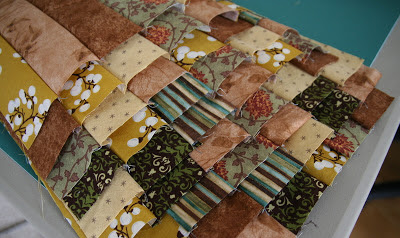 Then I pulled out the brown fabric and read the little note I had left on it: 2 yards.  Oh no, why did I think there was 3?!  Ugh, time to make a trip to Joann's.  The good news is I had a huge stack of coupons since Christmas is right around the corner, and was able to get the fabric I needed for 50%.  Luckily I recalculated how much I needed before getting there and realized I need 6 yards of brown!  Also luckily they had that much.

So my new brown fabric and strip of blocks laid on the floor next to each other for a while.  Then I realized we have company coming in a few days, and having a quilt on the floor of the room they would be sleeping in isn't very hospitable.  Finally, some motivation to get this quilt back finished and the quilt basted!

Here's the quilt back, over the couch while I pieced together some batting on the floor:


Thankfully we had a quiet afternoon at home today and Arden had a bunch of new Christmas presents to play with, so I finally got it laid out and basted!  I only had enough pins to put one in the center of every 6" block and about every 6" in the center of the border.  I think as I quilt it and take out some of the pins I will lay the quilt out and put some pins along the very edge of the quilt too.


I've been thinking a lot about how I want to do the quilting, and have finally decided on feathers on the grey area, and then stitching in the ditch around the colored triangles.  I had originally planned on doing feathers around the border, but now I think that would be too many.  How would you quilt the borders?
Posted by Renee at 7:23 PM