Since my last post I have been able to get a fair amount done.  It has been a quiet week at home (thankfully!), so I've been able to spend some time on both quilts.

I got 3 of the borders on the triangle quilt, but ran out of burgundy fabric.  So it has been laying on the floor until I was able to get to Joann's today.  I decided to go with a 3.5" finished pink border and a 5.5" finished burgundy border.  I really like how it looks so far!  My plan is to use a light pink thread for the quilting on the burgundy border, which should help lighten it and tie it in better to the rest of the quilt.

So now I'm back to working on the lone stars again.  I added the lavender border and cut dark grey (Kona Charcoal, my newest favorite background color!) fabric for one star, and white border and pink background for the other star. 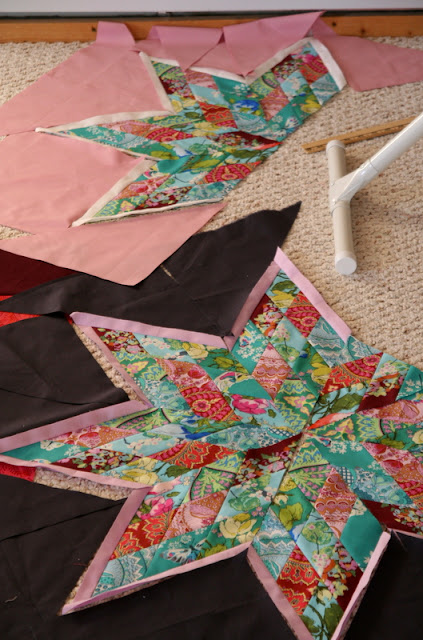 Then I realized that the star with the pink background would look so much better with a grey border, instead of the white.  I hated to rip perfectly good stitches, but knew I wouldn't be happy with it until I changed the border.  Luckily it's only half a star and it went really quickly!

Once I started sewing on the background fabric and then sewing the diamonds together I realized that some of the first cuts and seams were off a bit...which caused a headache in lining up the seams and points.  Oh well I did what I could and don't think it'll show or matter much once it's quilted.

Unfortunately I don't have a lot of the pink fabric, so I had to hodge-podge as much of it as I could, and it rather limits the finished size of the quilt to a wall hanging.

I'm really excited about the quilting on this quilt!  I plan to have the pink star on one side and the grey one on the other side, so they are facing each other (the photo above should have the grey star facing the other way).  It's hard to explain, so I'm excited to able to show everyone.  Unfortunately I have a lot to do before I get to the quilting though!