Since I was one block short of fabric for this quilt, I decided to make a scrappy block.  I like the way it turned out!


My progress on this quilt has been a lot slower, but I am up to 16 blocks!  I am hoping to get the last 4 done by the end of the month (if the kids cooperate).
Posted by Renee at 3:57 PM 13 comments:

I have been working on these quilt blocks a lot lately.  Each (18") block takes about an hour and a half  to make, from start of cutting a fat quarter for the half square triangles to the last seam on the block.  Of course that doesn't account for when the kids are awake.


Today I ran out of fabric for my blocks, so I am waiting for my order of fabric from Hawthorne Threads to get here.  I'm kind of tired of making these blocks for now though, so I'm okay with a break for a day or two!


I'm glad I've been able to focus on this quilt so much lately though.  I hope I have as much motivation and momentum to get the last of the blocks done before too long!  I'm looking forward to finishing this quilt!
Posted by Renee at 7:20 PM 10 comments:

I've been planning to make my older brother a quilt for at least a year and a half now.  In 2011 I made my younger sister a quilt and my twin brother a quilt, but several life events (having a baby, dealing with swallow bug infestation, putting house on the market and a dear friend dying) and some other quilts got in the way.  Also I had been planning a very intricate whole cloth quilt...and just could not figure out how to do it right.  The thought of trying something that new, challenging and large, while also keeping the house in near-show condition, and a move in the near future (hopefully), and two small kids running around, just didn't sound like fun anymore.  Also, compared to the other bed quilts I've made, it wouldn't look nearly as vibrant and colorful.

I finally came up with a new idea to use the Tula Pink Salt Air fat quarter bundle I got for Christmas (from my older brother, haha!).  I need to buy a second fat quarter bundle to make the quilt big enough, plus I added a couple of other fabrics from my stash:

I asked my brother which of three quilts I found on pinterest that he liked best and he chose the LynneBobSquarePants quilt.  The tutorial she has for the blocks makes a 12 inch block, but to make a queen size quilt, I sized them up to an 18 inch block:


Since this is not a scrappy quilt, I decided not to make the double-colored half square triangles (HST), instead just using the right sized square of fabric (does that make sense to anyone?!).  Twenty-four HSTs (per block) is enough, thanks!

I've been trying different methods of making HST, and like this one the best, no bias edges and they sew up fast!  I also found that pressing the HST seams open helped the finished block lay flatter/smoother, even though it more than doubles my ironing time.  Once the HSTs are all made and trimmed, the blocks come together really quickly.  I love big blocks, they are so gratifying to make.  If you've made a LynneBobSquarePants block or quilt, leave a link, I would love to see it!

I'm so happy to have this finished for my daughter's birthday today!  I know she doesn't really know the difference, but it's nice to have it done in time for something special, ya know?

How about some close ups? 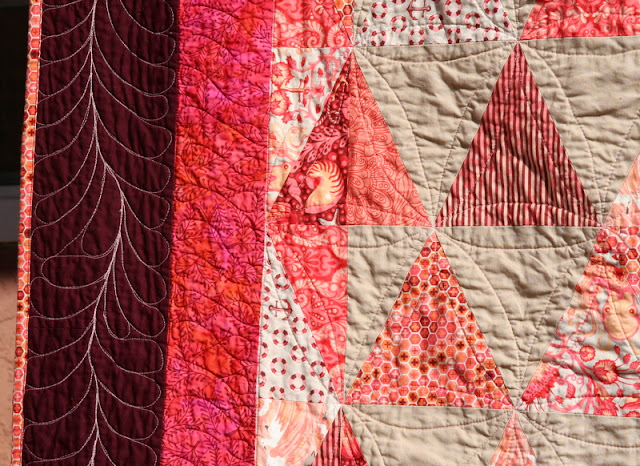 I sure am glad this quilt is going to my little girl, I will enjoy having it around for years to come!
Posted by Renee at 6:12 PM 16 comments:

Some issues I had while quilting...

Thanks to Hawthorne Threads (they have quickly become my favorite online fabric shop!) and their fantastic fast shipping, I finished the triangle quilt yesterday!  Unfortunately it didn't come out of the dyer until it was too late for a photoshoot, so I will share those photos tomorrow I hope.

Until then I thought I'd share some of the little details of this quilt.  The first is more about my machine.  I have had a Janome MC 6500 for about two years now, and have had the same issue on and off since shortly after I got it.  The problem is when I'm free motion quilting and the top thread periodically gets caught on the (lowered) feed dogs.  This brings my quilting to a screeching halt, until I break or cut the thread.  For record, I have tried quilting with the feed dogs up, but my machine (and the tension controls) did not like it at all. 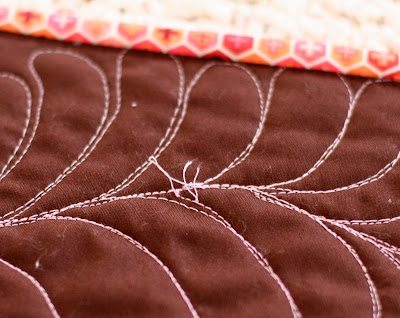 Once it's free of the feed dogs, I guess I have two options, 1) remove quilt from machine, remove stitches, start again or 2) keep going, leaving behind two 1/2 inch tails on the back (which I trim) and some crazy stitches.  About 99% of the time I just keep going.  On one baby quilt (that I still have, unused), it happened all.the.time.  It was awful!  On this quilt, it only happened on the feathered border. 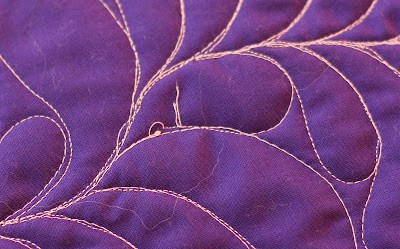 I think what I really need to do is take my machine in and try to duplicate the issue with there.  Have any other Janome users encountered such an issue?  I wonder if it is just my machine...

While quilting the last of the feathers, they got a little out of control and I ended up with this:


I tired to stay at least 1/4 inch away from the edge of the quilt to account for the binding.  But after trimming, squaring up and binding the quilt, quite a few of the feathers got cut off.  Bummer.  Next time I leave 1/2 margin!

Anyway, I'm glad to have it bound and washed!  I can't wait to share it tomorrow.  And I'm excited to start quilting my scrappy lone star quilt, and already have two more quilts waiting in the wings to be started.
Posted by Renee at 7:28 AM 2 comments:

Today I ran out of thread.  I hate when this happens, it kills my momentum!  Unfortunately the closest fabric/thread store is at least 25 minutes away, and it just isn't worth packing up the kids to make the trip for some thread.  Oh well, I'm still quite happy with my progress this week!

When I bought the thread I thought I was only going to be using it on the burgundy border, but then ended up also using it across the triangles.  The last time I quilted feathers I quilted them towards me, due to the direction of the spiral.  This time I decided to quilt them so they would 'grow' away from me, if that makes any sense!  I think I like this way a little better, but after doing feathers across a king size quilt, I am comfortable with both directions.

You can see on this photo how the loops on the inner border had issues around the corners.  I wish I had sat down with a pen and paper to really figure out the best way to get around the corners...but when I got to the first one while quilting I just kept going!  I know it could look better, but considering this is for a 1 year old, I'm okay with the way it turned out.

My daugher's birthday is on Tuesday, and if I manage to get the binding fabric soon, I may just finish this quilt in time!
Posted by Renee at 1:08 PM 12 comments:

I have had a small amount of time to quilt in the past couple of days, and have tried to make every minute count!  I hate to take the time to even blog right now, but enjoy sharing my progress.  And the kids are more tolerant of me quilting than being on the computer, so I try to do my computer stuff during quiet/nap time and other stuff while they play in the same room.


I did the on-seam orange peel quilting for my son's plus quilt, and really enjoy how quickly it goes and how cool the finished circles are!  Since this quilt is for my daughter, I like that they will have sort of matching quilts (geometric shapes and similar quilting).  I knew that on triangles it would create a cool flower pattern, but I didn't think of the resulting flower-within-a-circle pattern on the back:

Over the weekend I got both quilts basted!  Unfortunately I don't really have enough curved safety pins for two quilts, so I ended up scrounging around the house for any other safety pins. 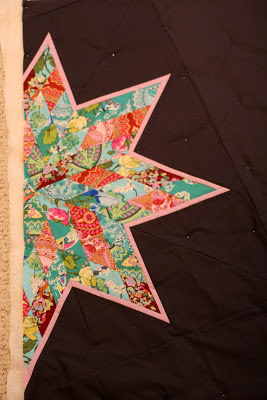 I wish I had put the pins on the grey side, since that's the side I know how I want to quilt.  But I have a week or two to figure it out while I quilt the triangle quilt:


I'm glad these quilts are coming together relatively quick, I have so many projects to do all of the sudden!

Linking up with Plum and June!

I was very happy to get this quilt basted last night after the kids were in bed.  I still don't know how to quilt the main part of the quilt, which is okay since I know I won't be able to start the quilting until Sunday.


I do plan to use a light pink thread to quilt feathers around the outer border, and possibly swirls or loops around the pink border with burgundy thread.  Most of the triangle quilts I've seen online have straight line stitching, either in the ditch or 1/4 inch from the seams usually.  I'm just not convinced that would be the right quilting for this quilt.  How would you quilt it?  Or if you've made a triangle quilt, how did you quilt it?  Share a link in the comments, I would love to see it!  :-)