After some more doodling on the quilt print outs, I settled on some organic swirls in the blue blocks: 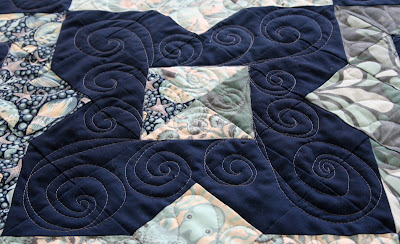 For some reason my swirls/spirals almost always go counter-clockwise.  Even when doodling, even on almost every quilt I've made!  Maybe it's like left or right handed--built in, ya know?

There are 12 of the blue blocks and 14 half blocks around the border.  The swirls are a lot faster than feathers to quilt, which I was happy about!  I love that all the quilting has an air and water movement to it.


I had read in more than one place that Aurifil is nearly lint-free...but I did not find that to be the very true. 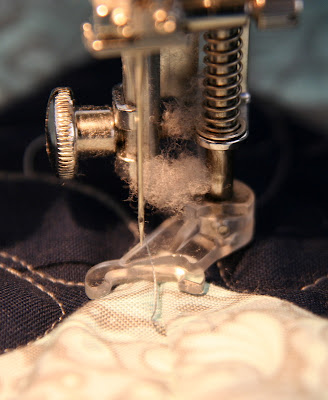 I had to remove lint from the needle shaft area 3-4 times during this spool (nearly all 1422 yards of it).  It seemed like a lot of lint!  Overall I did like the Aurifil thread though: it quilted smoothly, I had ZERO tension issues, and it didn't break or have any problems in the thick seam areas or places I quilted over repeatedly!  The cone I bought is from Follow That Thread, it had the best price and shipping cost out of the many other websites I checked.  And the selection of colors is awesome.

I only have 3.9 of the center squares to quilt, but ran out of thread!  Now I must wait for my cone'o'thread to arrive...
Posted by Renee at 6:20 PM

Email ThisBlogThis!Share to TwitterShare to FacebookShare to Pinterest
Labels: ChrisBobSquarePants