Note:  This is going to be a pretty wordy post about the process I went through to make the Super Tote--so if you don't plan to make one, you might just scroll through the photos ;-)


Friday evening I finished sewing the exterior of the Super Tote, and decided it was time to compare it to my current diaper bags to see if it was the right size.  Well, it was too big!  It was nearly as wide as the Nikki Tote I made last year (when I had two in diapers), and a little taller.  Not at all the size I wanted.  I wish I had taken a photo!  The other problem with the bag is that the exterior fabrics I chose looked great together, but not so good with the rainbow thread I used (you can see that here).  I really wanted it to work together, but it just didn't.

So, to fix both those issues, I took it apart.  But since I wanted it to be smaller, I saved myself some seam ripping by cutting the quilted pieces away from the gusset piece (but kept the gusset the same size).  I then decided to use the interior pieces I had already cut as the new exterior pieces (I did have to trim them down a bit).  Unfortunately I didn't have enough of the Salt Air fabric to make the wide top band from the pattern, so I decided to just use the narrower interior top pieces for the outside as well (this also meant the bag was at least 2 inches shorter, which was something I wanted). Unfortunately the narrower top piece doesn't look nearly as nice, and there were some (minor) sewing issues with the straps.

I decided to keep the inside simple and used Kona coal and various stash fabrics, and added a light interfacing to to give a little more shape.  I added two zipper pockets (maybe 8" x 8") about an inch above the gathered pockets.

I used a pink and blue zipper to color code things (for myself and husband)--it's easier for me to find something when I'm consistent about where I put it, and it's easier to tell husband where to find something!  The pink one is for Mommy things I use daily (phone, wallet, keys) and the blue one is for things I don't want the kids getting into (like pills, candies, lens wipes, hand sanitizer, etc).  I love how they turned out, so here's a bunch a photos of them: 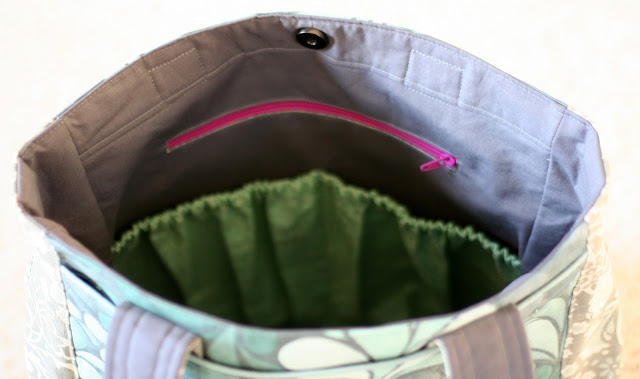 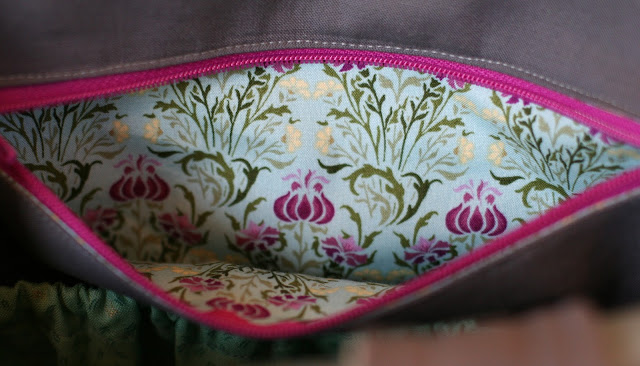 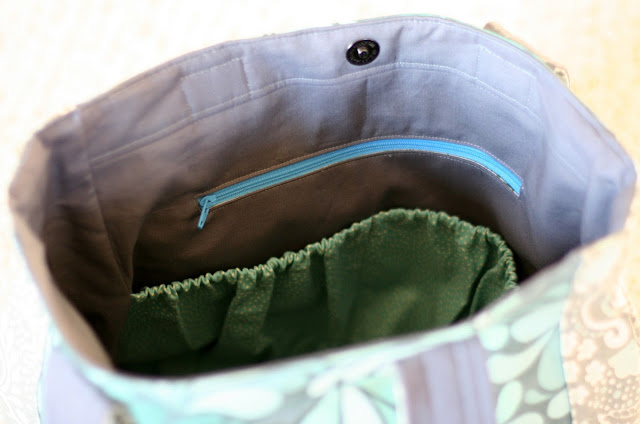 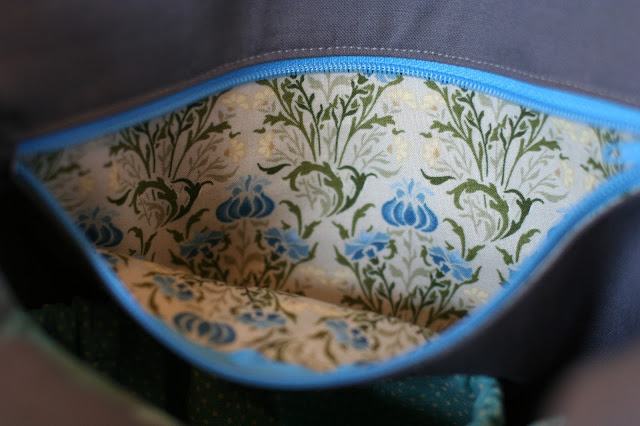 I decided on a magnetic snap closure because the Nikki tote bag I made last year has a recessed zipper and I never used it.  But I constantly wished I had just put in a magnetic closure!  Here it is all loaded up:

Here's a look at how it compares to the Nikki Tote and the bag I was using:


I am very happy with it and all the changes I made.  If I were to do it over (now that I know how big it is in real life), I would just print the pattern at 80-85% of normal, but keep the straps the same.   And I might add another pocket or two...I never have enough!
Posted by Renee at 11:24 AM