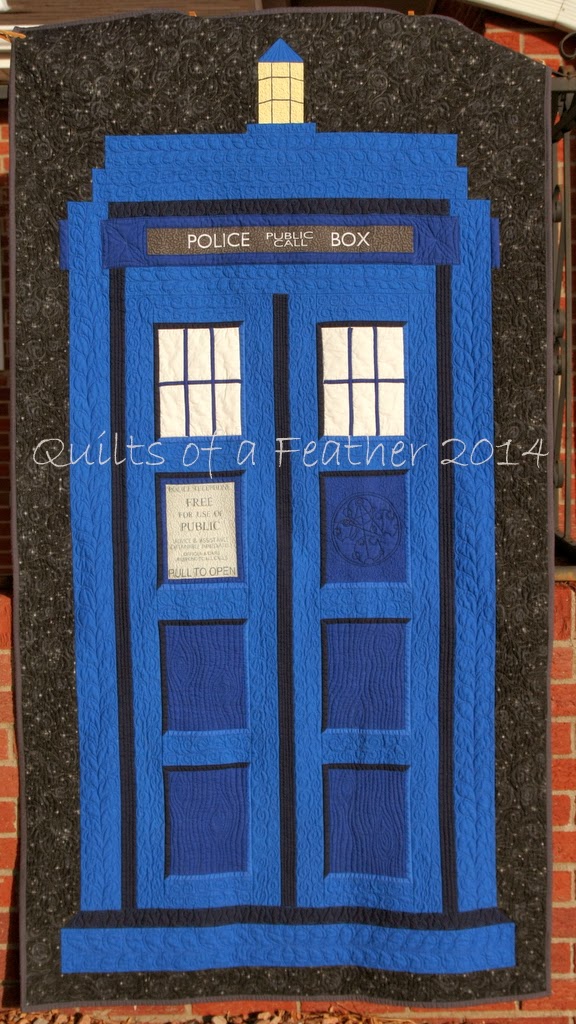 I hope you came for a picture show!  I finished my TARDIS II quilt this week (see the first TARDIS quilt here).  Because the Spoonflower TARDIS panel is no longer available, I designed my own--so this quilt is entirely designed, pieced, and quilted by me.  The only thing I outsourced was the Police Public Call Box sign--it is from this etsy seller.  Eventually I'll figure out the best way to make that for myself too. 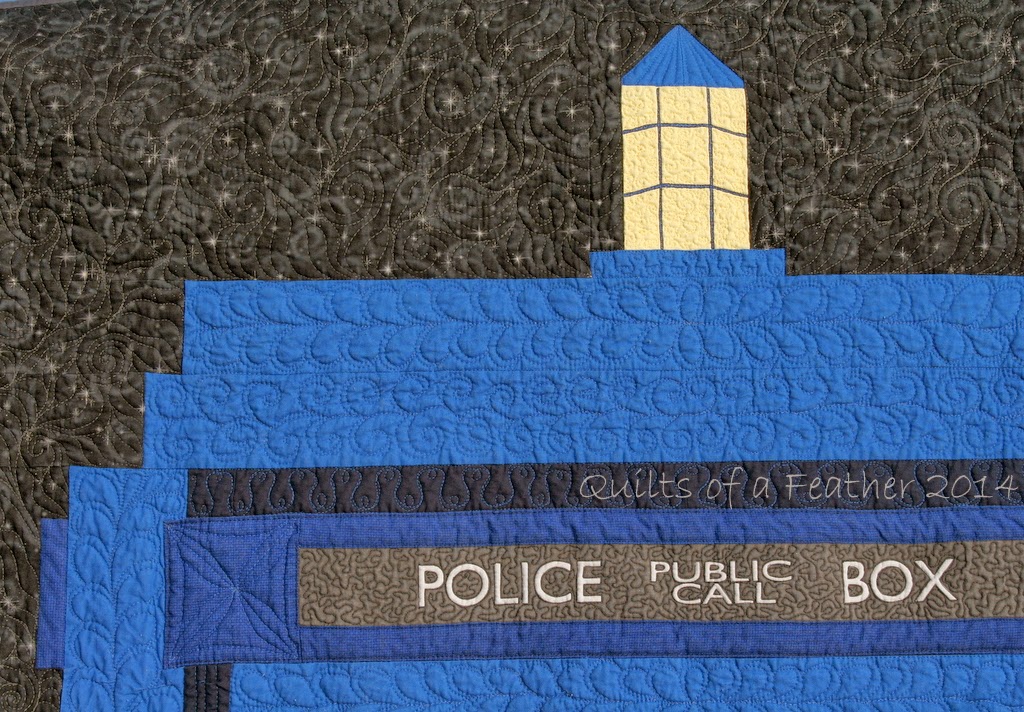 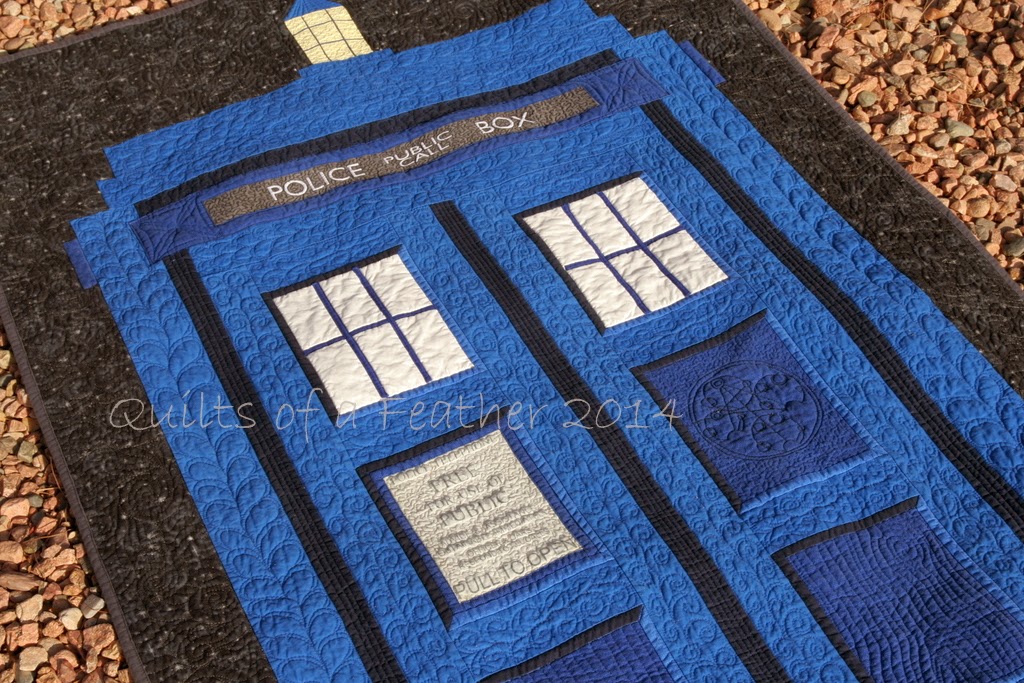 This was a commissioned quilt, and they only wanted one Gallifreyan panel, and no angels in the windows.

The Gallifreyan takes at least an hour per panel, and the angels even longer.  This quilt took 34+ hours, including designing it, so I was glad to only do one specialty panel!


In the other four panels I quilted a wood grain pattern: 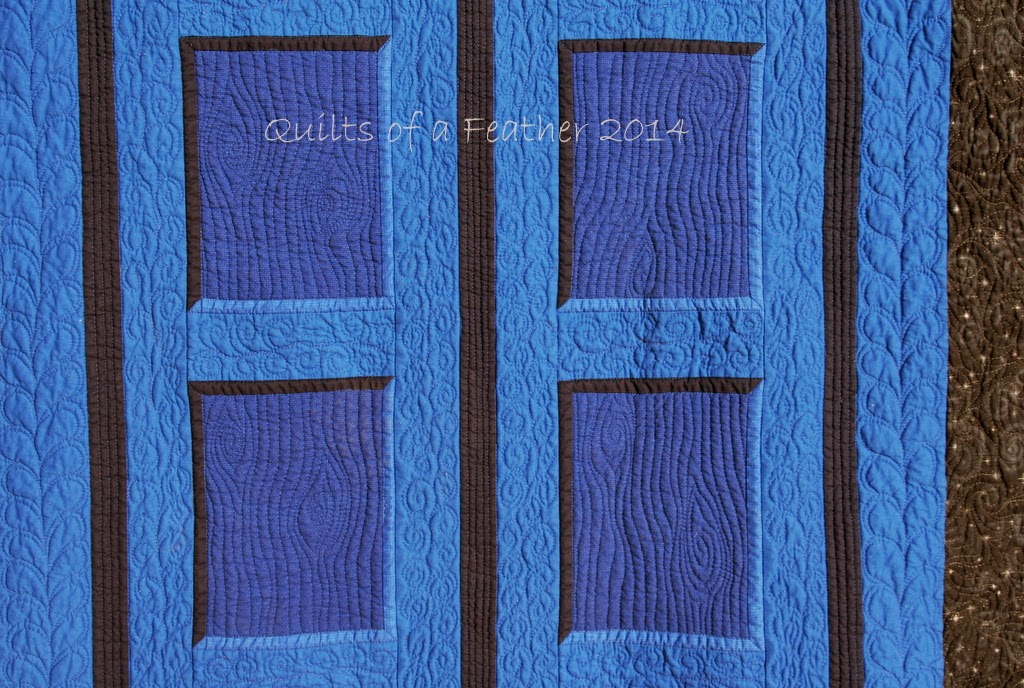 The door sign I printed myself from this photo onto a muslin, and set it using Bubble Jet Set: 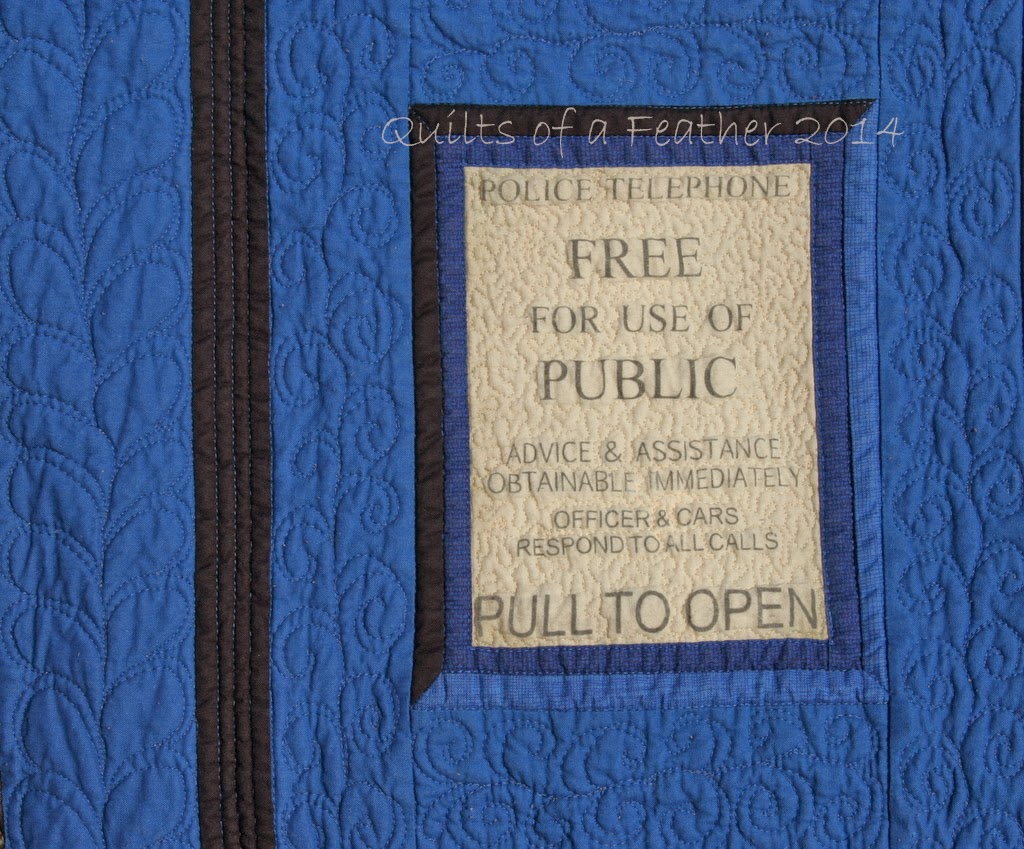 The dividers on the light are quilted on using a navy and royal blue thread: 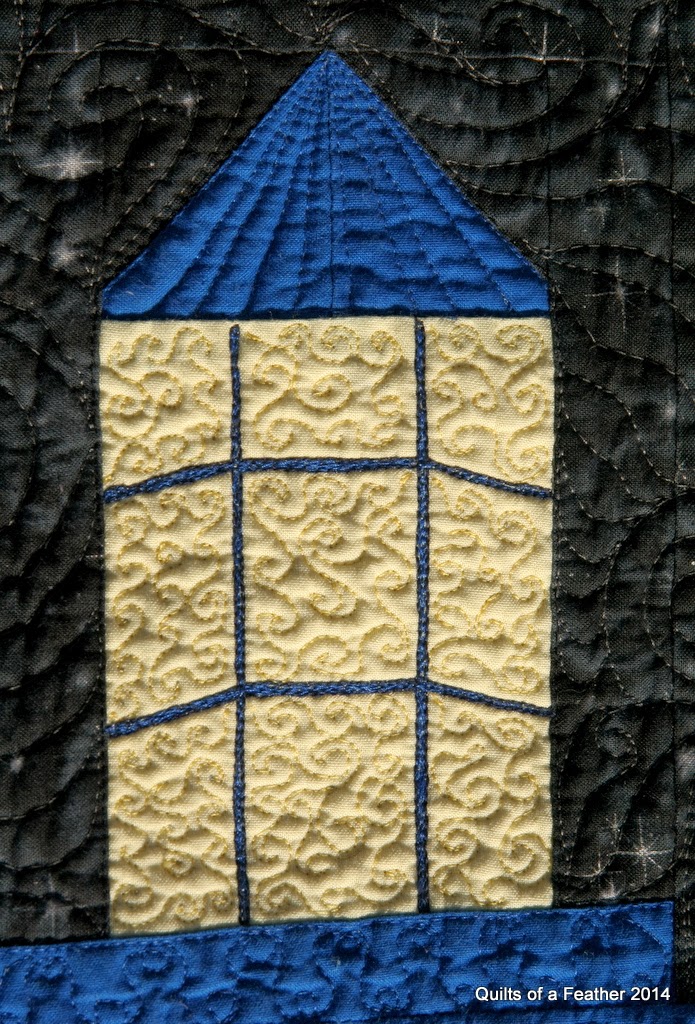 I bought all of the fabrics at Joann's, as I had a very tight timeline to get this finished.  The back is Kona Navy, the binding is Kona Charcoal (which I had on hand), the border is a Robert Kaufman fabric, the main blue of the TARDIS is a Legacy fabric (I think?) in Bright Blue.  Joann's in-store blue selection is lame: navy or baby (candy?) blue.


Here are some detail shots of the back, I love how well the quilting shows up on the back! 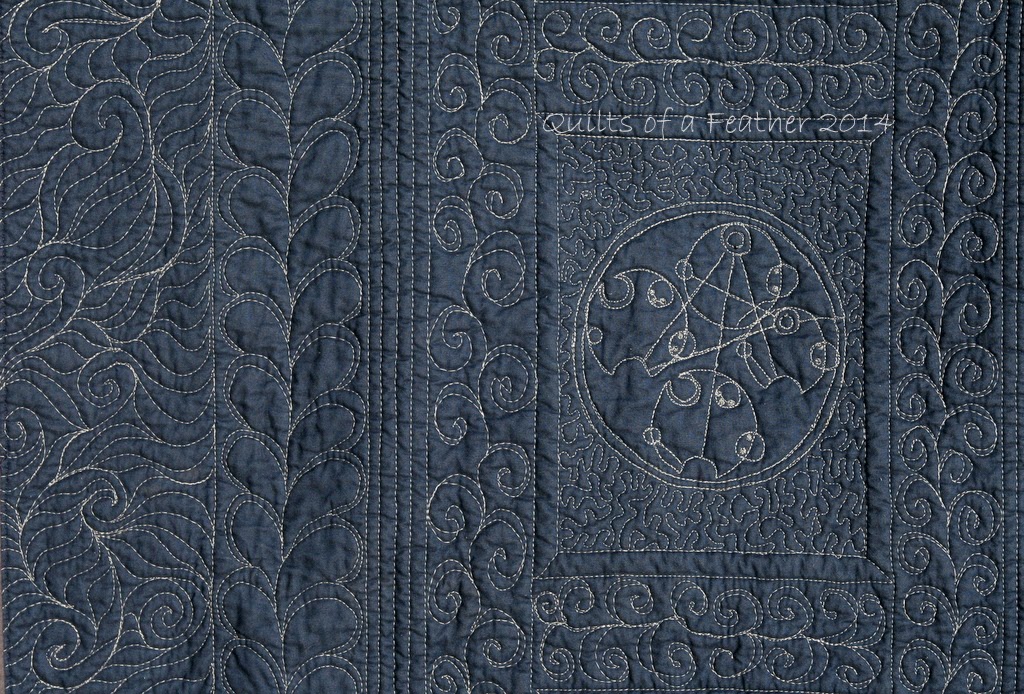 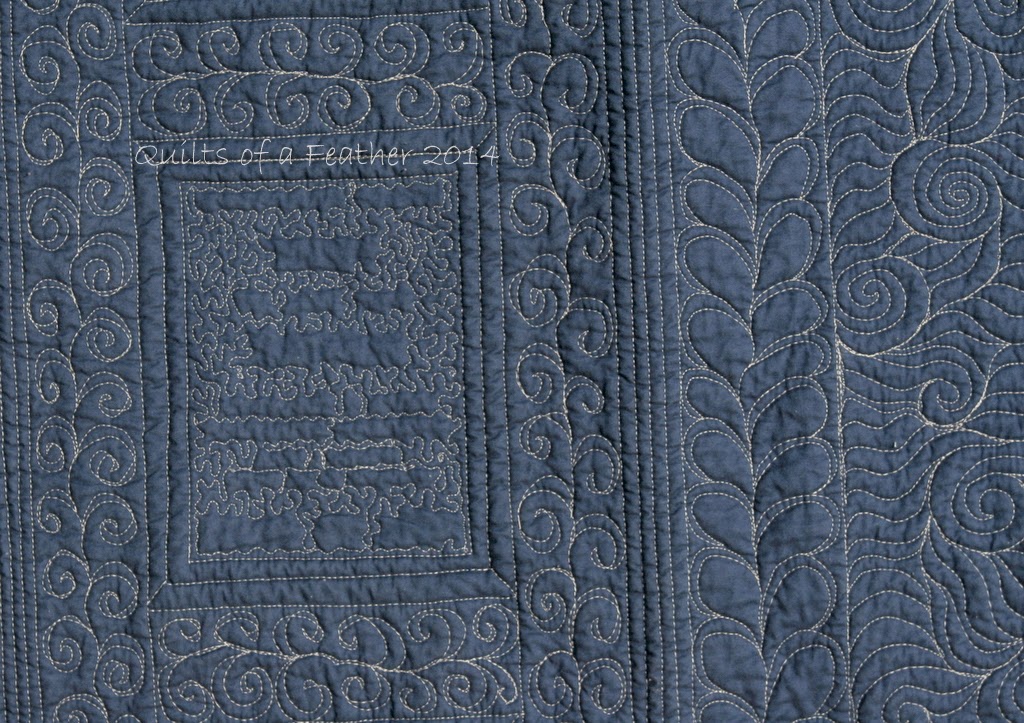 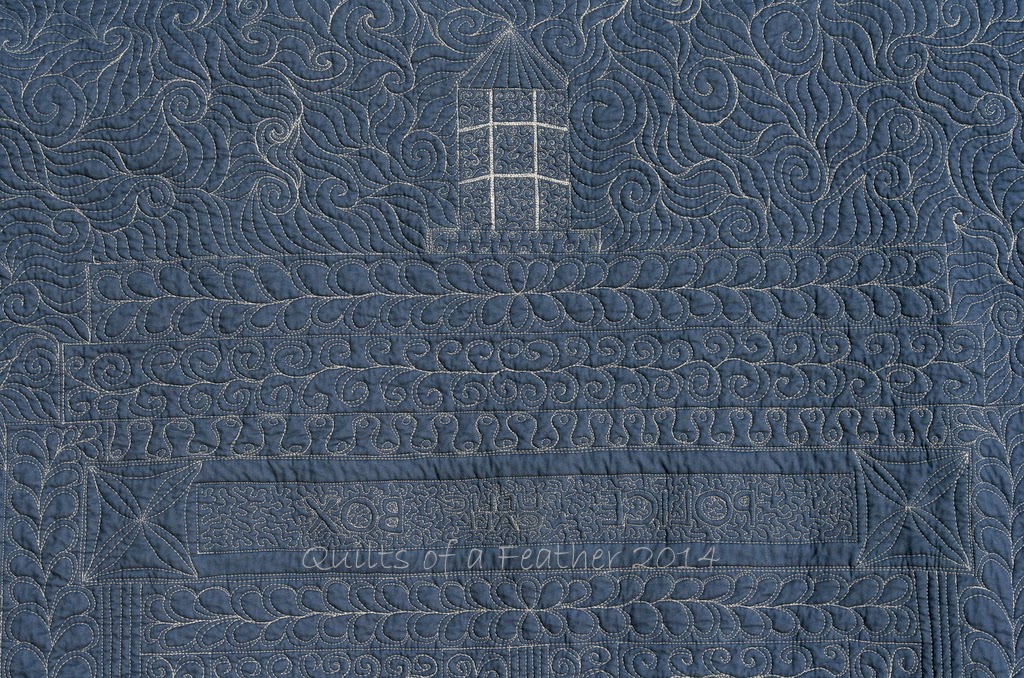 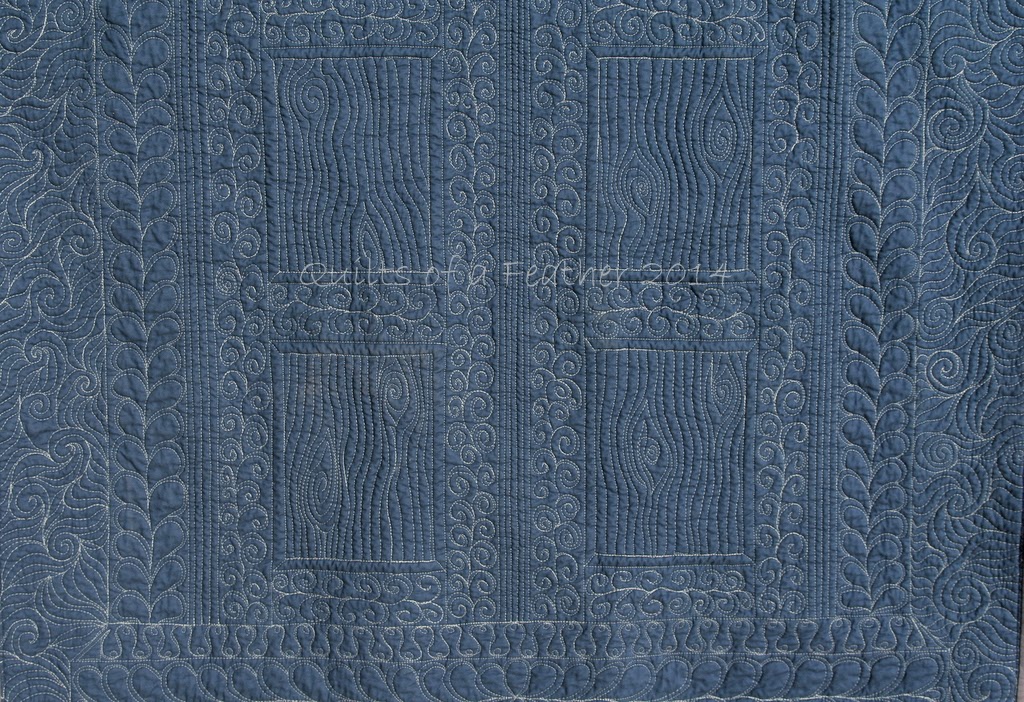 My son "helped" with photos and insisted on being in a few.  Had I known this in advance I might have put a red bowtie on him, ha! 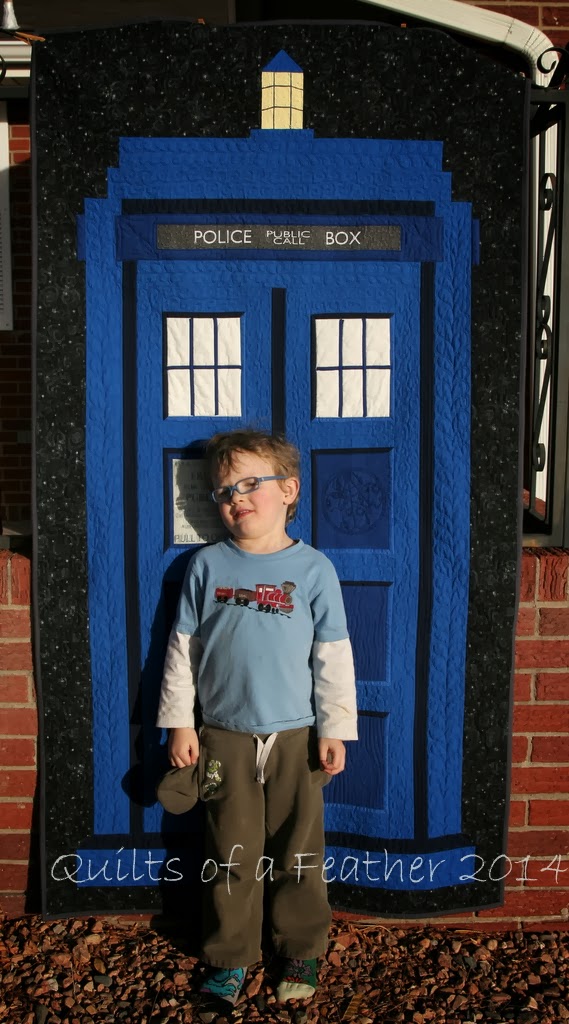 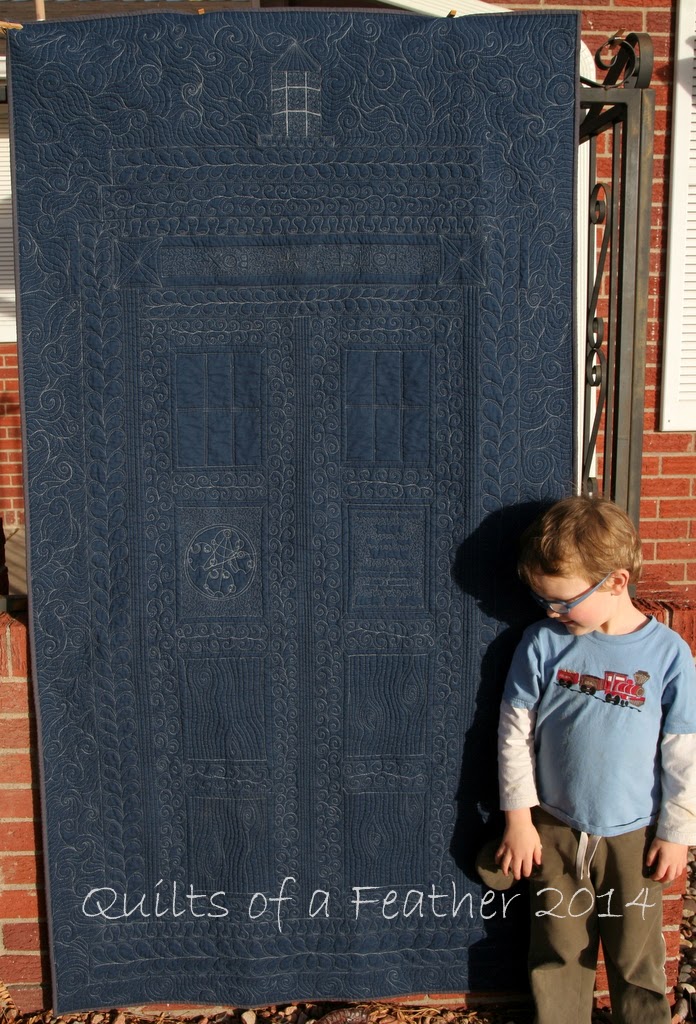 This quilt is being shipped off tomorrow to it's new home.  It's the first quilt I've made for someone I don't know, and it's weird knowing nothing of it after it leaves here.  Ah well, best of luck in your new home, TARDIS II Quilt!

I finished the quilting on this Sunday evening--so excited!  I am on schedule to finish by the end of the month, yay!


Now I'm just waiting for an hour of well-lit alone time to trim/square it and then put on the binding!  And then wash it...and I am very nervous to do so with my first ever printed panel (the door sign) that I forgot to prewash after printing it.  I did use Bubble Jet Set on it, and after it was pieced in I made a second sign to pre-wash and see if the ink would hold.  Here's the results:

Fingers crossed that the one in the quilt washes just as nicely.  I should have it finished to share on Friday!

Sewing with Certainty: Showcasing Your Work

This post is a part of Quilty Habit's series and link up on Sewing With Certainty.  Almost everyone else has mentioned being a part of a guild as a big part of showing off their quilting work--but until today I'd never been.  This morning was the first time I remembered there was a meeting, got a babysitter, and actually went.  I won a year's membership by getting first place for my Lone Star quilt at the state fair last year, and Tula Pink is doing a trunk show in a couple of months...so it was time.  Anyway, it was pretty boring.  And I was most definitely the youngest person there.  And I still feel exhausted and like poo from this cold I've had for over a week.


But I went, and I even brought along my recently finished F.C. quilt for show and tell.  I asked the president if it was okay, and she said sure, then gasped, and then said maybe not to read what it said.  Ah...well that's okay.  I just told everyone it was in memory of a friend that died from cancer at 27.  I think only the ladies at my table actually read it (and half of them were delighted and in awe of the quilting--"Where did you learn to quilt?"  "The...internet?").


So, how I do I showcase my work?  Well, I started with just sharing what I made on Facebook with friends and family.  But as I started reading more quilting blogs and using people's patterns and tutorials, I wanted to share with more people.  So I started a blog--something pretty small and simple to share what I was working and display my finished quilts.

And it stayed pretty small until I started getting involved with various linky parties about a year ago.  Since then I've gained a bunch of new followers, found a bunch of amazingly talented bloggers that inspire and encourage me, and I've actually made some quilty friends!

So this blog is where I showcase my work, share ideas, and get amazing feedback.  This blog is how I am an active part of the online quilting community.  I love this community, and I so appreciate all of my followers and the comments I get!  Thank you for being a part of my community! 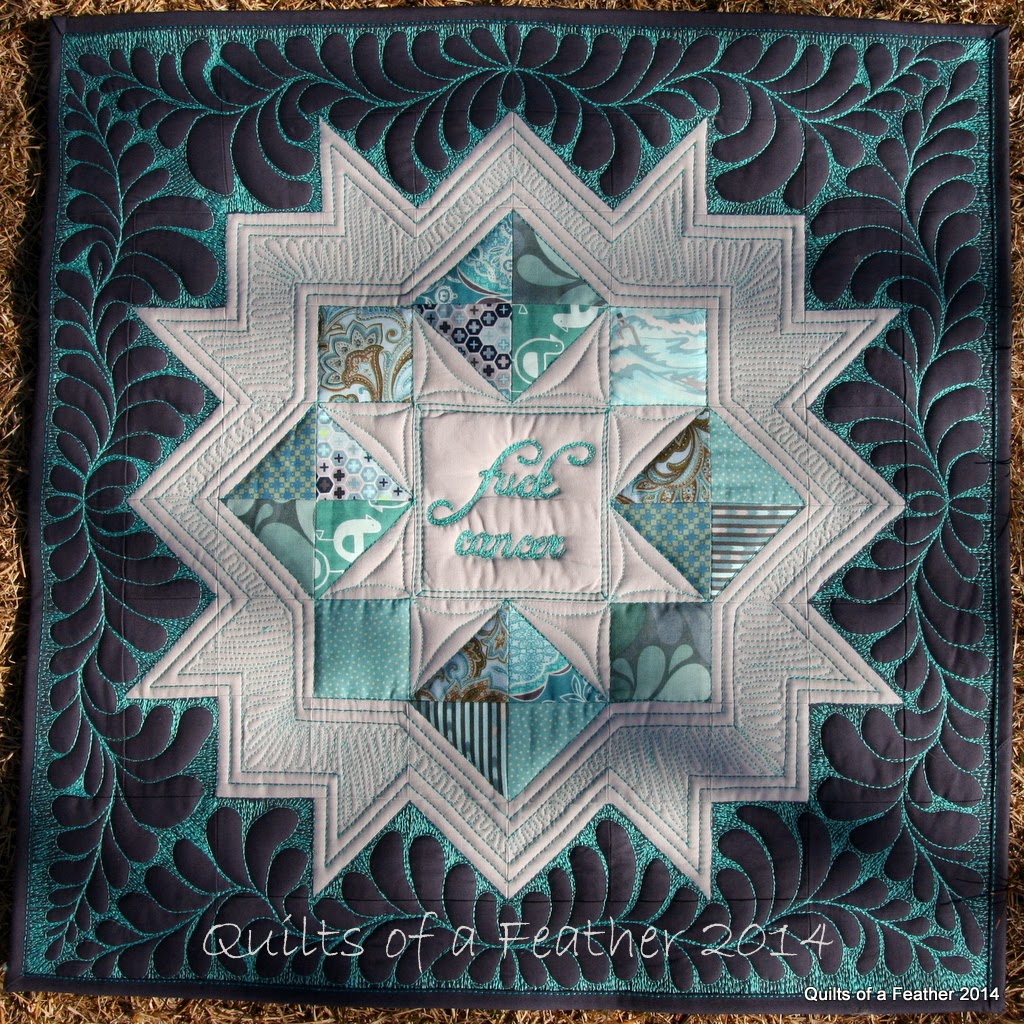 I hope y'all aren't offended by the word fuck.  If you are, then I suggest you stop reading the text now and only skim the photos...or just go read someone else's blog today.  I'm not going to tiptoe around it or offer any apologies.

But I'm betting that nearly everyone has been affected by cancer in some way.  This is my F.C quilt that I've been designing for many, many months, and finally putting together over the last month.  It was my way of dealing with the pain I've gone through of losing a best friend to cancer in November of 2012.  And then my husband's uncle in July 2013. 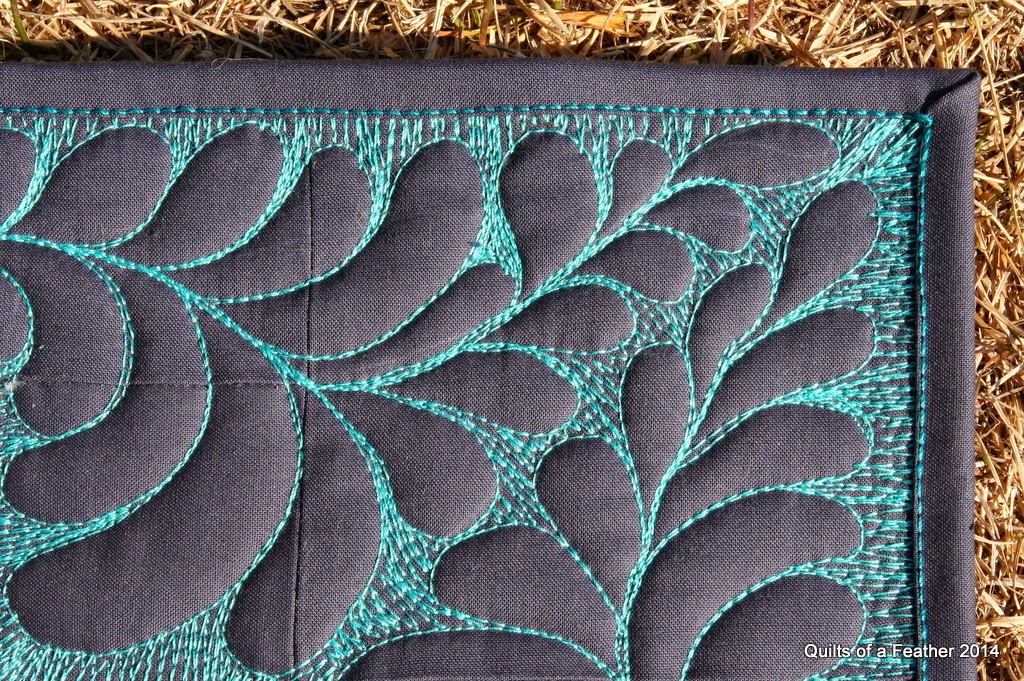 You might be thinking, "Why would you put that much time and effort into something with such an ugly word?"  Because fuck cancer, that's why.  Same answer for any other questions you have. 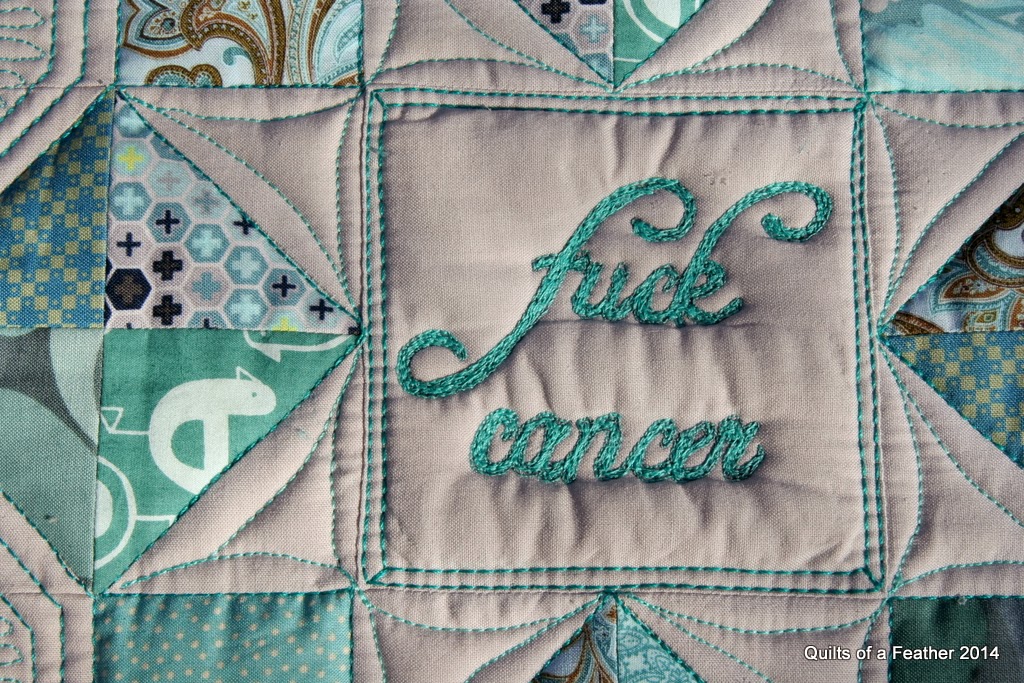 My friend that died was named Jessica--we'd know each since we were kids, and had been pretty close friends since the age of 15.  Just before my husband and I got married she started dating my husband's good friend, so we often went on double dates.  We'd go months without seeing each other and then hang out and nothing had changed.  When I went through a very dark time after my son's birth (you can see the resulting quilt here), she was one of the very few people that genuinely listened, cared how I felt emotionally and validated my feelings and experience.  We didn't always agree on things, and we often did things completely differently--but there was never judgement.  She was one of those friends.

She was diagnosed with stage IV Ewing's sarcoma (a pediatric bone cancer--at age 26) in December, and died in November.  The last several months were incredibly painful for her, and extremely difficult to observe.   I'm still sad and angry about it.  Fuck cancer.

I chose the froggy fabric because a couple of the frogs from the fabric were in her Prayer Quilt that I made, and I consider frogs to be her totem animal--they always remind me of her.


I used this pattern for to make the carpenter's star, changing the color blocking to get the effect I wanted.  The font is Freebooter from dafont.com.  I specifically chose a fancy font that might be hard to read for some people (especially my 4 year old son, haha...not ready to explain how the word fuck applies to something that I want to die).  I used water soluble stabilizer to transfer it to the quilt.


I used two layers of batting--one of warm and natural and one of some high loft poly I'd found at a thrift store.  I spray basted the whole thing together and had a lot of issues (due to the double batting, spray basting and larger threads) with the threads breaking and skipping stitches.  Finally I switched needles--from a universal 80/12 to a topstitch 90/14--and things went significantly smoother! 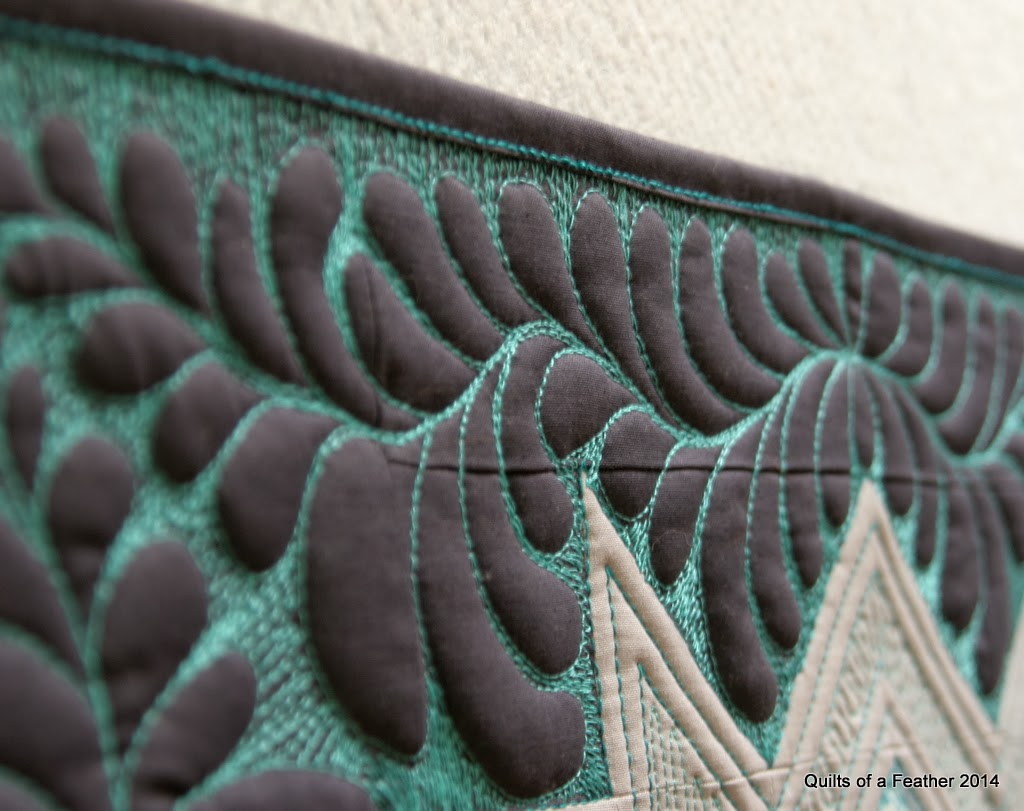 I used Kona Ash and Kona Charcoal, and a bunch of my favorite fabric scraps.


I was really hoping to have this finished by her birthday on the 19th, but...well...here it is.  But this is how our gifts always went--days, weeks...months late.  It didn't matter though--it really was the thought that count.

I've been working on both the TARDIS II quilt and the FC quilt this week--both of which I hope to have finished within a week and be able to share here.  Here's a sneak peak of the FC quilt to hold you over: 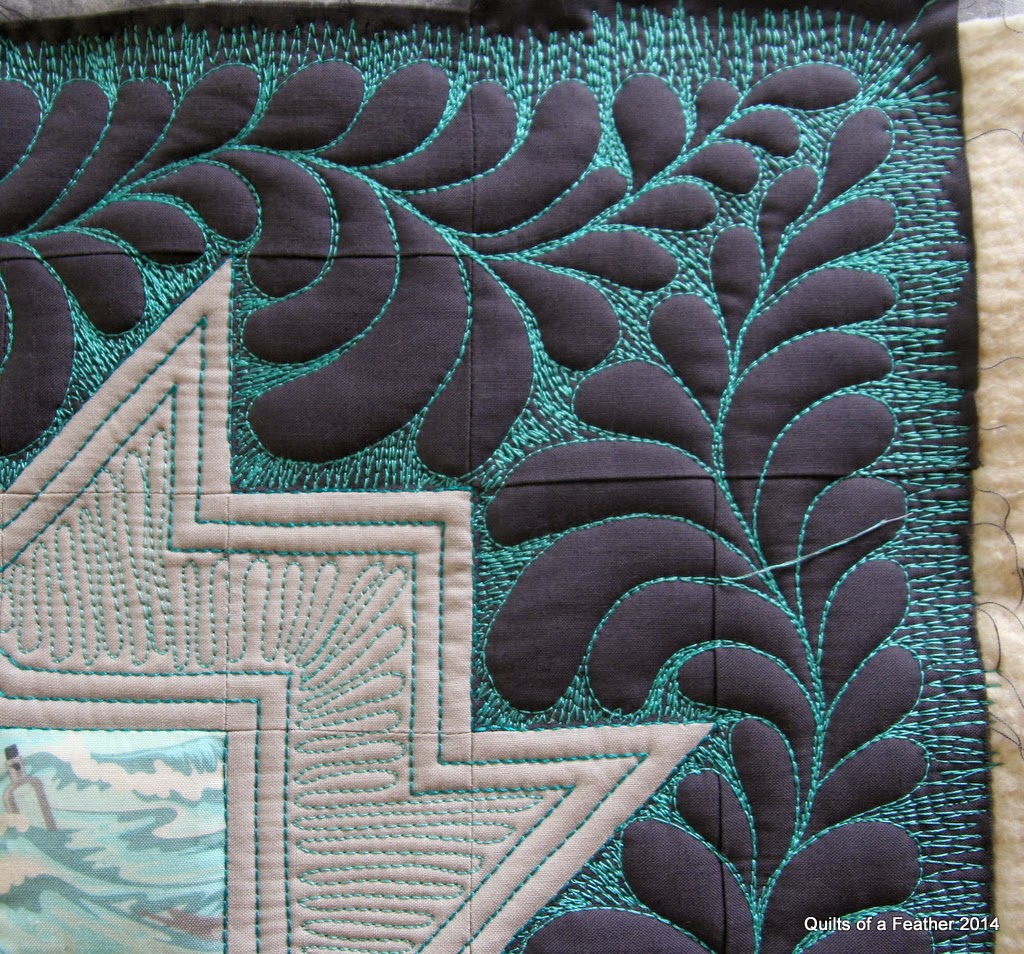 I had a lot of FMQ issues on both quilts--and it turns out for mostly the same reason: two layers of batting and lots of spray basting.   My usual fixes didn't work, and after having the needle skip around and thread break a bunch, I finally found a blogger than mentioned that heavy spray basting can cause skipped stitches.  Finally an answer!  Then I knew it wasn't my machine, and decided to finally try a larger needle--a topstitch 90/14.  And things have been going much, much better (though still not perfect)!


I had been planning to just quilt this one exactly the same as the first TARDIS quilt, but there are enough differences that I've had to figure out new quilting in some areas.  On the border I've tried three different threads:


And wasn't happy with any of them--my husband suggested doing a looser quilting pattern so it doesn't cover or distract from the stars and swirls on the fabric so much.  So my plan is to try that using the dark grey...but I'm still not sure.  :-/

Anyway, here's how it looks today--hoping to get the other four panels done and then work on the border.


Okay, time to get back at it--I really want it to be done by the end of the month!

This is an update to my last post on designing a TARDIS quilt, and shows the progress I've made with the quilt itself.  I've been editing the design as I've been putting it together--it is far from perfect, but it is a good starting place if you ever want to make your own!

**This design/pattern is for personal use only!  I do not own the TARDIS image, I just want to share my process from one fan to another!**

Here are the fabric requirements again: 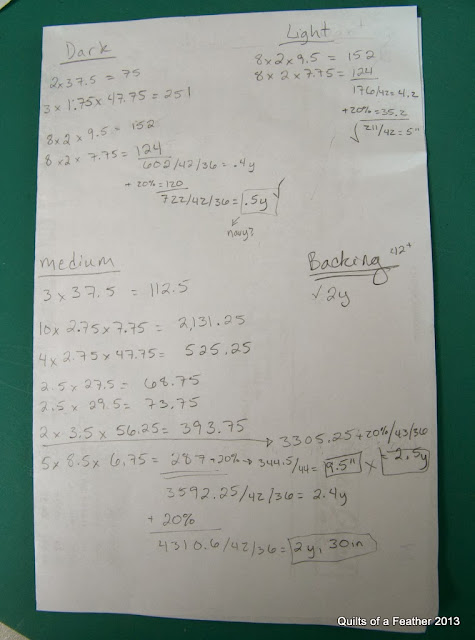 I bought all of the fabrics at Joann's.
The back + darker parts of the TARDIS = Kona Navy
Binding = Kona Charcoal (which I had on hand, I would use black next time)
Border is a Robert Kaufman Stars in Black
Door panels + Police Box sign border = "basket weave" by Legacy Studio in Lake
Main blue of the TARDIS =  Legacy Studio in Bright Blue
Police Box sign is from this Etsy shop
The lighter border fabric on the door panels were a lighter version of the basketweave I already had (sorry, no info)


Here's how I put it together: 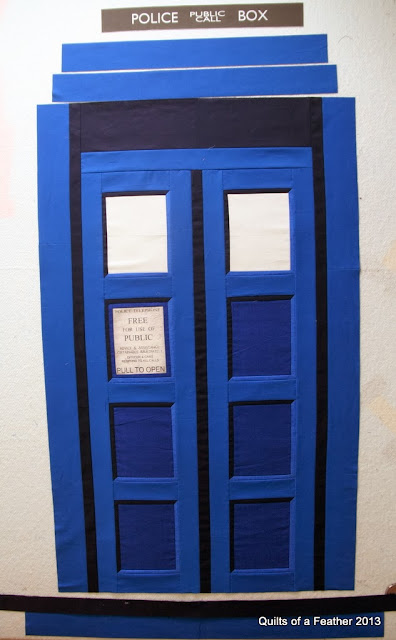 Then I started sewing the border fabric on--started with little blue pieces on the sides of the tardis and the main sides, then the roof strips, bottom strips, the light and surrounding, and then sewed it all together.  It probably sounds more confusing than it was--I will take lots of photos next time (which will be in a few months, if you want to wait that long)!!


In total it took about 7 hours to put together the quilt top--designing the quilt took at least that long too!  I've basted the quilt already and will get started on the quilting soon.

If you make a quilt with this pattern I would love to see it!  I'll post updates to the pattern again after I make it again and post a link here.