I made this to go on the back of the Pandorica Opens quilt, and also for my entry in the Radiant Orchid Challenge over at Play Crafts. This quilt was heavily influenced/inspired by this quilt.  I used this tutorial to make a custom template for the wedges (which are 10" long), leaving the point sharp (but trimming off the extra seam allowance to avoid extra bulk in the center) and the end rounded.

I collected all of my purple fabrics and scraps and laid them out, separating the more blue-ish ones from the more red-ish ones.

There was a bit of trial and error getting the fabrics in the right order as I started sewing them together.  I only had to redo a few of them luckily. 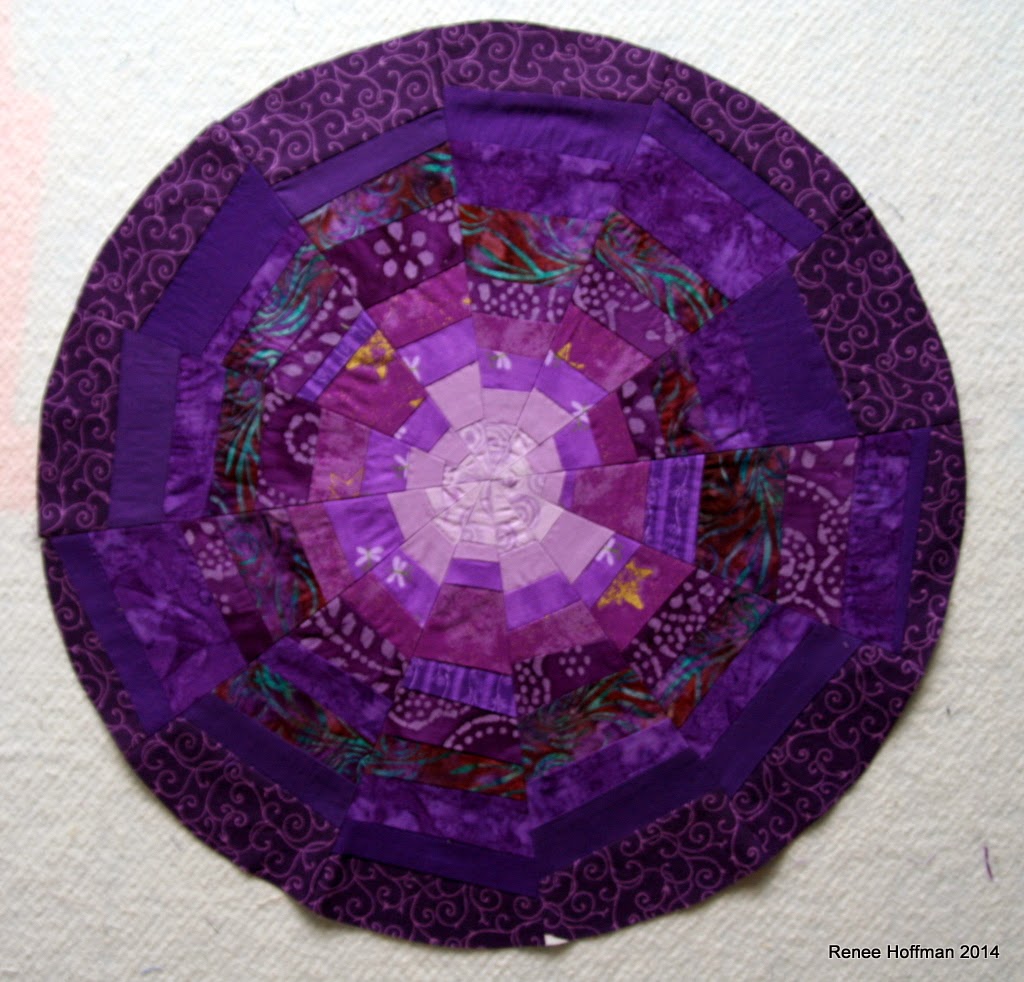 Once I had pieced all the wedges together, I carefully measured around the perimeter marking and trimming so it was exactly 20" diameter.  It turned out to be worth the extra time because piecing the circle to the border piece was a piece of cake.

I considered quite a few different colors for the border (dark purple, black, brown, charcoal) but none of the fabrics I had were just right (and I didn't have black, boo).  So I went with this Pixel Dots by Tula Pink. 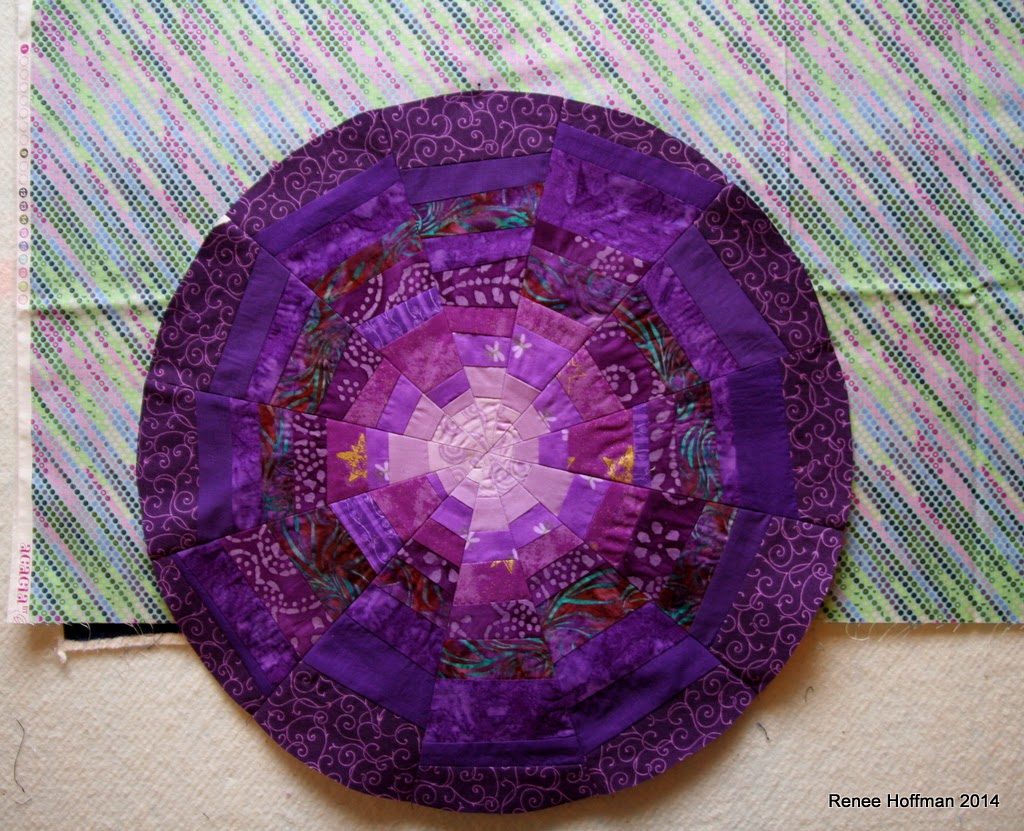 I used  this tutorial (specifically week 2 and 5) to make a template for the border pieces, and pieced it together.  Here's the border pieced together, laying over the exploding tardis. 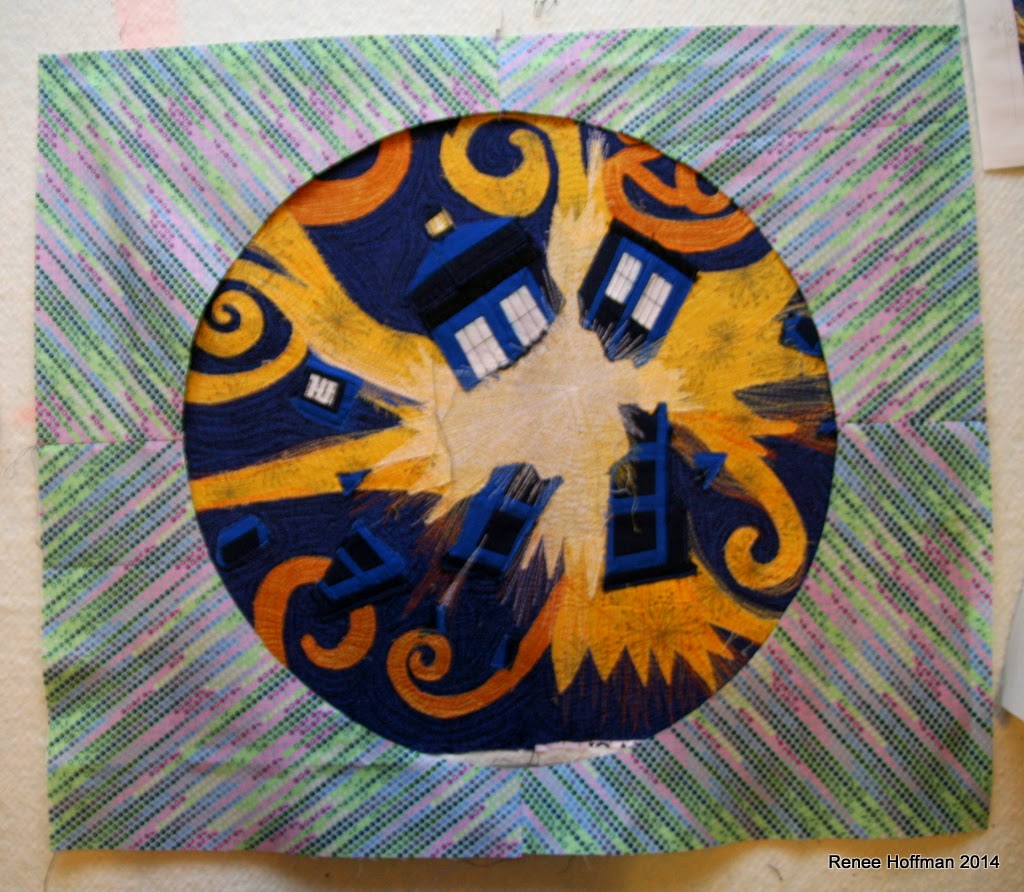 Pinned, and ready to sew these curves: 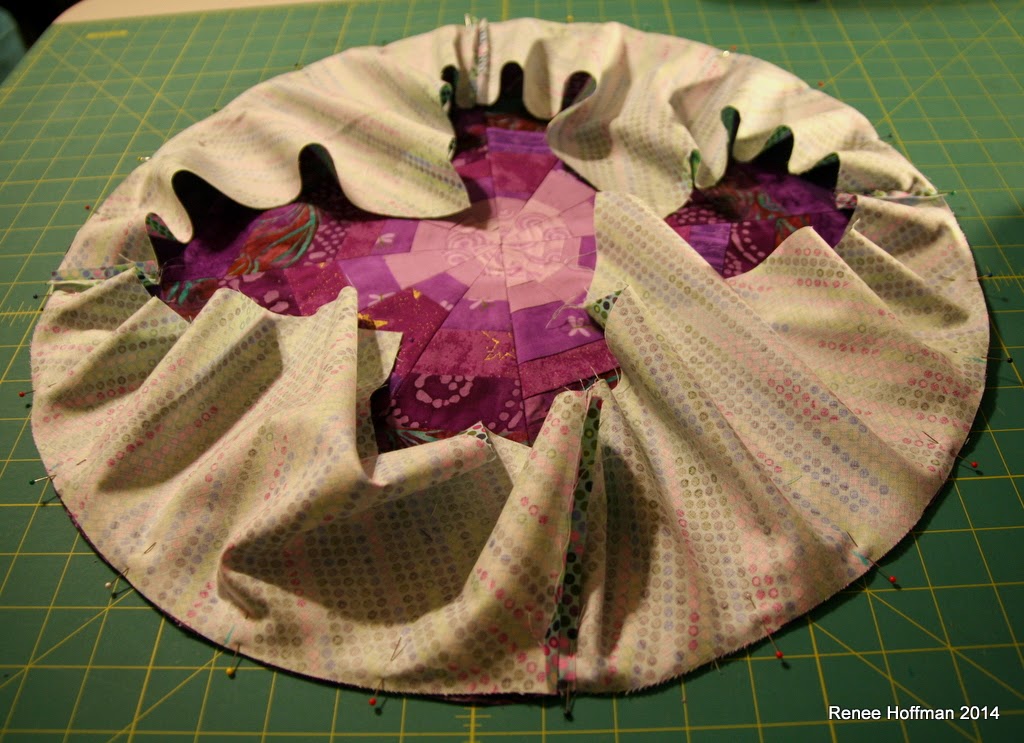 It was seriously so easy to sew the border and center together!  I was ready to quilt in no time: 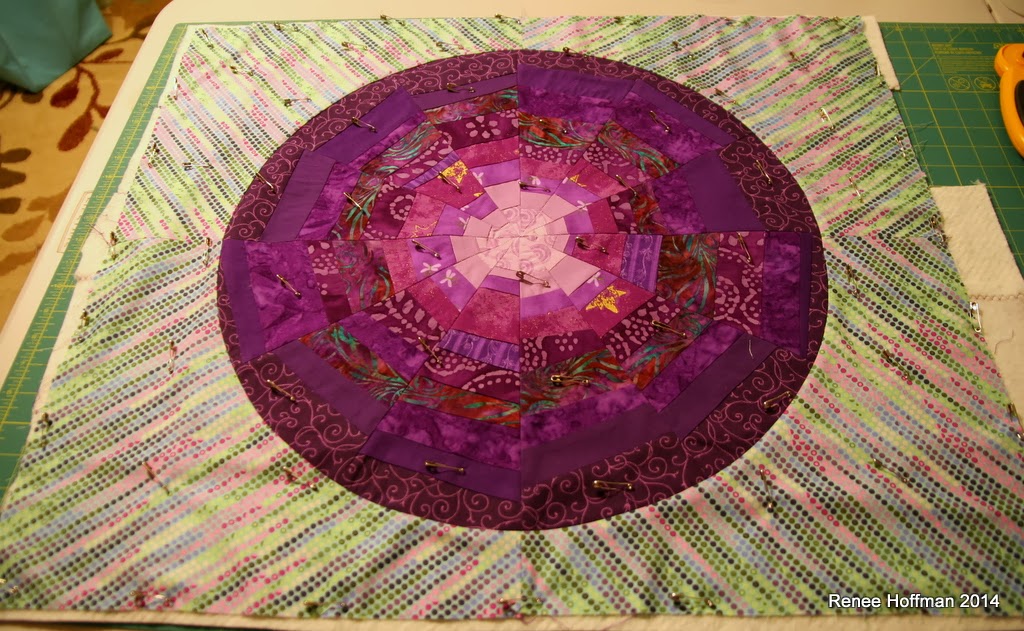 I spent a lot of time trying to decide on how to quilt it.  Finally I decided on quilting each wedge with my own version of Angela Walter's plume feather pattern.  I used Aurifil #2545--I LOVE this color.

For the border I quilted concentric circles (not a spiral--each go-round is independent) at various widths using my walking foot and Aurifil #1148 in a 28wt thread. 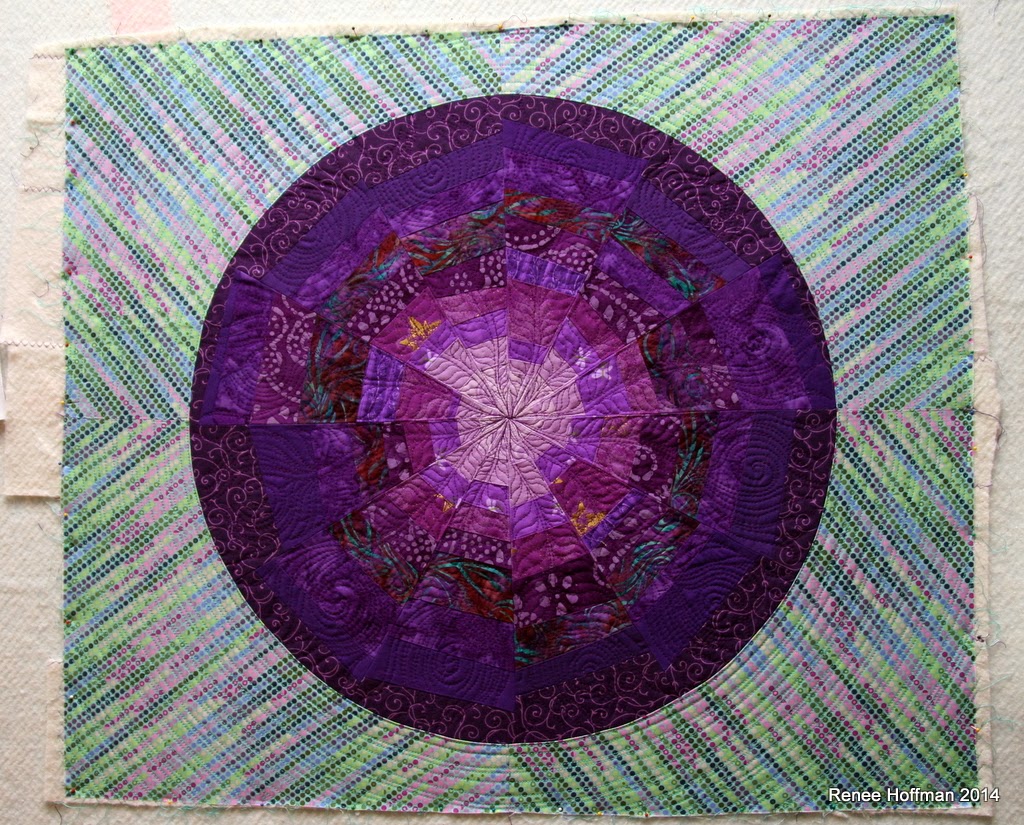 Then I trimmed it down using the Pandorica Opens side as a guide:


I basted the two sides of the quilt together around the edge before adding binding and a hanging sleeve for a double sided quilt. 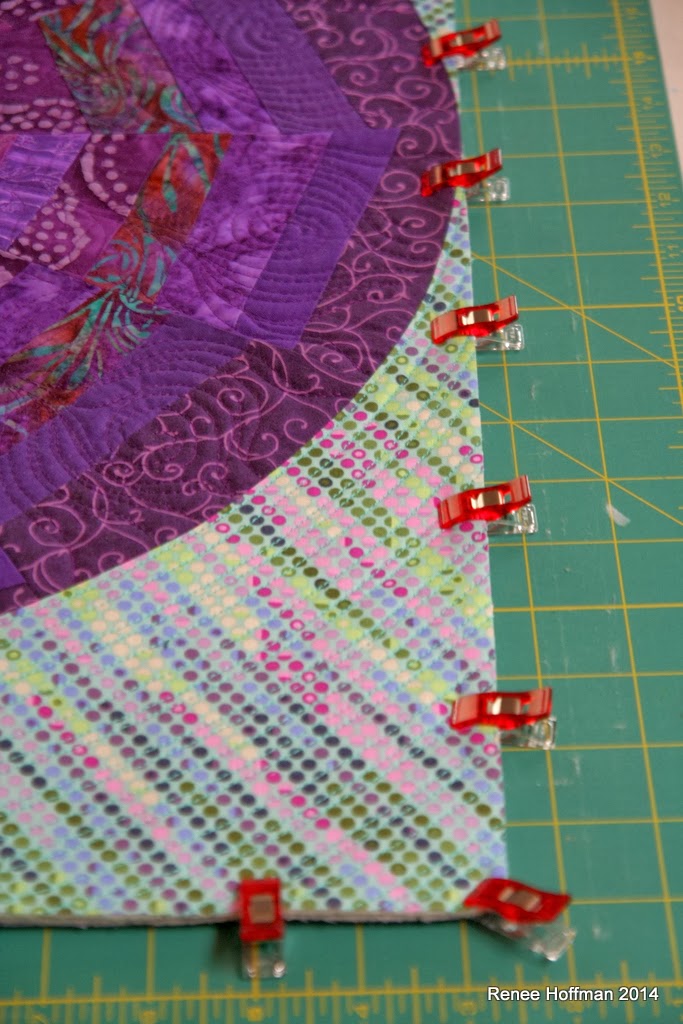 I'll be post the finished quilt tomorrow and link up with the Radiant Orchid Challenge starting the 14th!